Having flown back up to Auckland, we spent the last week or so visiting a couple of places in the north that we’d missed at the start of our trip. First we took the bus over to the Coromandel peninsula, a popular holiday destination among the Kiwis.

Our driver was a slightly odd chap and a bit of a jobsworth. Having rigorously enforced the bus company’s rule stating that there is to be no food on board the bus, he proceeded to buy several hot buns and pastries from a bakers which he dumped on an empty seat where we could all see and smell them.

As he hurtled along the narrow windy road that circles the peninsula he regaled us with the usual patter interspersed with repeated warnings about which bus stops not to use and which hostels he didn’t do pick-ups from. He particularly enjoyed pointing out the consequences of drink driving - we passed numerous wrecked cars and vans at the bottoms of valleys, evidence of the popularity of this particular form of foolishness in New Zealand. I had to restrain the urge to point out that driving a full bus like a nutter was also a potentially dangerous. At least he stopped every so often to let us get off, swallow our stomachs and even take the odd photo of the coastline. 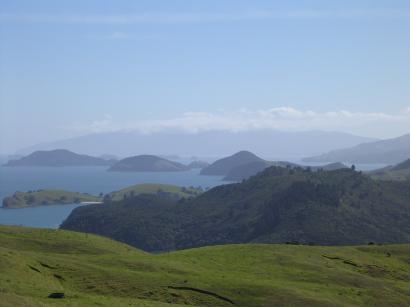 We stayed in the small town of Whitianga on the eastern side of the peninsula. It’s close to two of the area’s well known attractions, the Hot Water Beach and Cathedral Cove. Whitianga itself is a pleasant place on the shores of a bay with a long beach and a harbour filled with small boats of all kinds. The beach is covered with countless shells gradually being worn down by the sea. 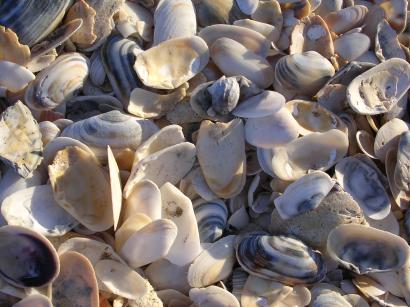 We made the obligatory pilgrimages to the Hot Water Beach and Cathedral Cove in the company of a fellow guest at Whitianga YHA, Des from Chepstow, who kindly acted as chauffeur. The beach was a bit of a disappointment. Sink your feet into the sand a few inches and the temperature rises fast. An interesting phenomenon, but not one that takes your breath away. Cathedral Cove was a bit more spectacular, but we both felt that we were perhaps suffering somewhat from scenery fatigue by now. Still, it’s amazing what water and wind can do to rock given a bit of time. 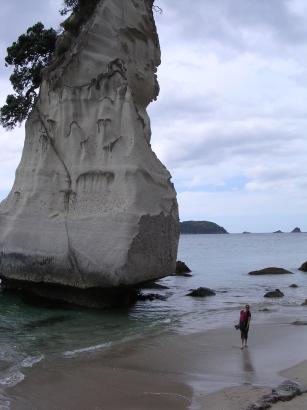 We weren’t anywhere near as underwhelmed as an American tourist we encountered who seemed to regard the entire country as a complete disappointment. He blamed this on an exaggerated marketing campaign by the New Zealand tourist industry which had raised his expectations too high. I thought he was just a bit of a tosser. Who could walk down the beach at sunset and still be so negative? 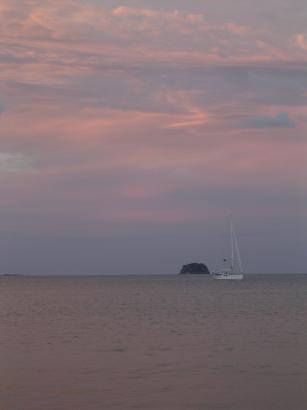 It was the tail end of the summer, so it felt as though we had the town to ourselves - quite a contrast to peak season when the whole area is heaving. Whitianga had the air of a place on the verge of becoming a victim of its own success, there were signs of development everywhere and the network of new roads surrounding the town implied quite an increase in size. This is a common problem faced by all popular holiday destinations across the planet - expansion so often spoils the very things that drew people in the first place. Still, the local people seem well aware of the potential problems and there was evidence of a debate over the best ways to manage the expansion. Good luck to them, it’s a lovely spot, and it’d be a great shame to spoil it.