Quite possibly New Zealand’s most famous destination, Milford Sound (actually a Fiord, not a Sound, as you are often told) is located in the Fiordland National Park in the South Western corner of the South Island.

The Sound is comparatively remote. Most tourists do a day trip from Queenstown, something almost beyond belief when you realise that you are going to spend eight hours on a coach and about two hours actually at Milford Sound itself. From Te Anau you can easily drive in a or take one of the smaller tours that are more leisurely and much smaller and more personalised. We went with a company called Trips and Tramps, and they were very good.

From Te Anau, the journey is an experience in itself as you pass up the valleys and into the mountains. Most of the tour parties (small or large) stop off at a few well-known spots for photo opportunities, like here in the Eglington Valley. 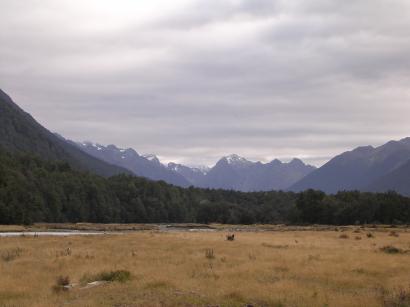 There are plentry of places to stop along the way and take in the surroundings. The car parks and picnic areas are often frequented by Keas, large alpine parots with vicious looking beaks, insatiable apetites and a complete lack of fear of humans. They will strip the rubber parts from your vehicles, so keep an eye on them. 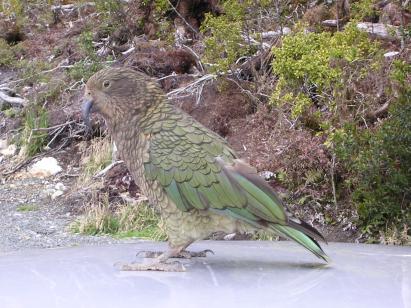 The road winds up into the mountains and through the Homer Tunnel, carved during the Great Depression as part of a government employment scheme. The tunnel is quite narrow but has only recently been made single track due to the increasng volume of coach traffic using the road - previously everyone just squeezed in and hoped they’d get through without getting stuck. When you come out on the far side of the tunnel, the road winds down through some spectacular scenery to sea level again. 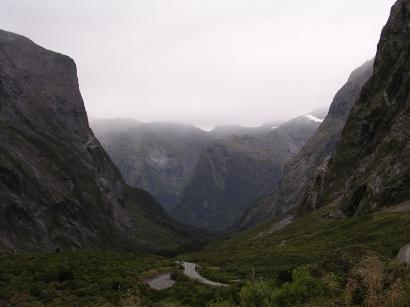 As you come down to the Sound itself you are greeted by the classic postcard view. Don’t expect views featuring clear skies and reflective waters - the chances are that if it’s not raining it’s at least going to be fairly misty and cloudy, but this has it’s own beauty. We were lucky and the weather held for our trip. There was just enough mist to add some atmosphere but not enough to obscure the views completely, and all the moisture was feeding the waterfalls which cascade down the cliffs into the dark waters, further adding to the ambience. 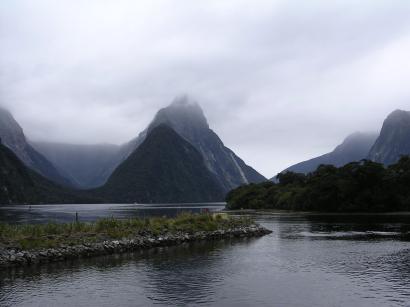 The obligatory boat trip was fun, although there are a lot of boats out on the water at any given time. Fortuantely the Sound is pretty big so it’s not too bad, but forget any fantasies of a sense of splendid isolation - you’ll never get away from the fact that there are hundreds of other people around. Milford Sound is a beautiful spot with many things to recommend it, but being off the tourist trail is not one of them.

Don’t let that put you off, though. It is an amazing place - the cliffs tower above you to almost dizzy heights. Getting across a sense of scale is very difficult. The boat in this picture is around the size of a double decker bus and probably had about sixty people on board. 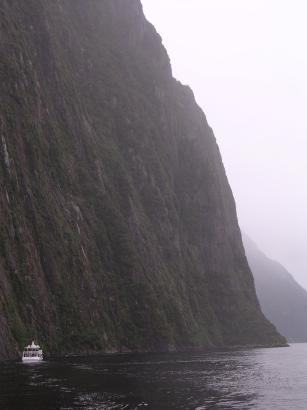 The trip takes you down one side of the Sound, out into the Sea, then back down the other side. Almost all the boat trips do the same route, but offer slightly varying levels of comfort.

When the boat emerges from the entrance to the Sound you can look out across the Tasman in the direction of New Zealand’s nearest sizable neighbour Australia, several hundred miles away, and ponder just how far from everywhere else the place is as the boat swings around and starts to sail back inland. 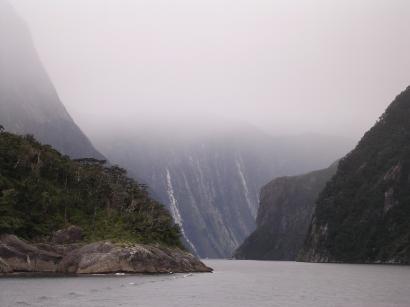