Punakaiki is a tiny place sandwiched between the rugged west coast and the Paparoa National Park. Most passers by only stop for a few minutes to take a look at the Pancake Rocks and the blowholes - eroded rock formations where the spray from the breakers is forced up through holes in the rocks and emerges in spectacular spouts. 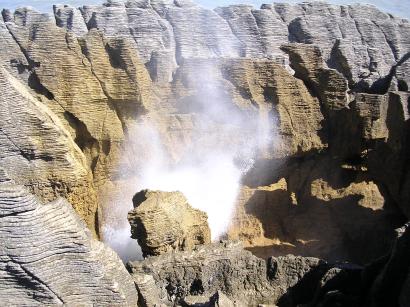 These aren’t the only attractions in Punakaiki. The coast in general is rugged and beautiful, and so sparcely populated that it always feels quiet and isolated. 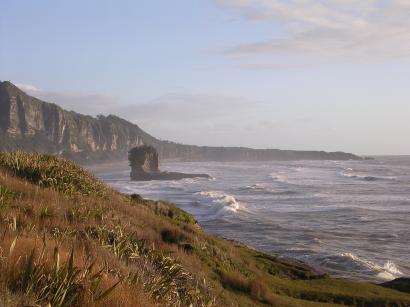 As the town is also one of the gateways to walks in the Paparoa National Park, there are several tracks you can take that meet up with the Inland Pack Track. These trails also make pleasant shorter walks if you don’t fancy a longer trek - the walk up the Pororari River is particuarly beautiful, running between great limestone cliffs clad in tree ferns and Nikau Palms. 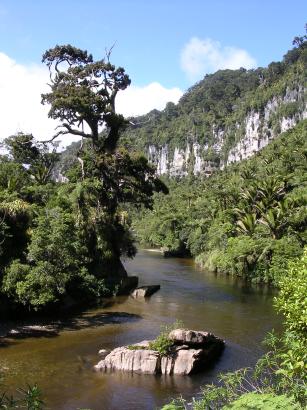 The Nikau Palm is a distinctive tree, quite common along this stretch of coast, and particularly notable as the only species of palm native to New Zealand. It is quite a stange sight when in flower - long thin pink tendrils extend from the juncture of the trunk and the leaves and look more like some kind of parasite than an actual part of the tree itself. 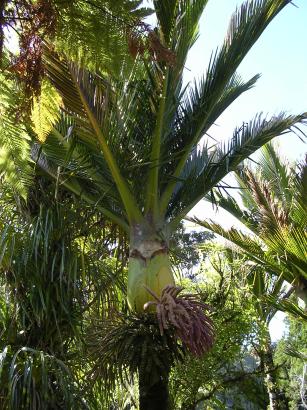 There’s a great hostel in Punakaiki named for the palm - the Te Nikau Retreat. Located near the Truman Track about 3 kilometres north of the Pnacake Rocks, it comprises a series of cabins scattered through an area of thick forest. 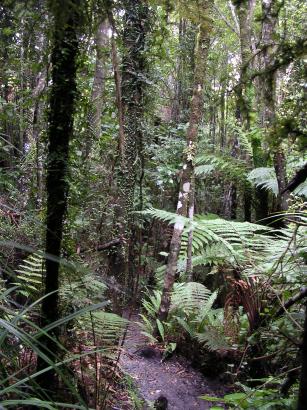 It’s simple but comfortable, and a great place to relax in for a few days if you enjoy being away from it all - the place is 3k’s out of a town which has no cellphone access, no shops, no bank and no broadband, but the scenery is spectacular, the locals are welcoming, the daily homemade bread and muffins are great and by all accounts it’s a nicer place to stay than anything either Greymouth or Westport, the area’s larger towns, have to offer.