Of the two larger and most famous of New Zealand’s glaciers we decided to stop at Franz Josef rather than Fox for no particular reason. It is said that there are differences between the two, but that neither is intrinsically better or more interesting than the other. Some travellers we encountered seem to rate Fox over Franz Josef, but I suspect that this is more down to backpacker snobbery as the former is less visited and thus no doubt mysteriously purer or something due to the lower number of coach parties. I even met one person who enthusiastically argued for the merits of Fox entirely on this basis, having never actually visited either. But I digress.

Unfortunately our brief stay has left us none the wiser, as the clouds descended and the rain didn’t cease for the entire period. The west coast is renowned for it’s high rainfall, averaging well over 200 millimetres every month of the year. The driver on the bus assured us as we came into the Franz Josef village that we were experiencing average conditions and that the chance of seeing vistas like those pictured in the brouchures was roughly equivalent to winning the Lotto. 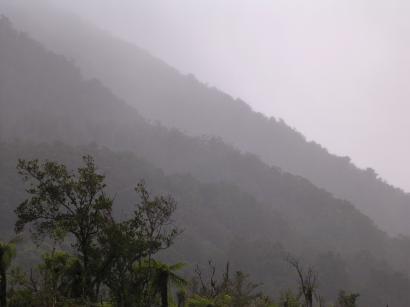 Nonetheless we attempted to view the glacier, getting thoroughly soaked and becoming closely aquainted with the inside of a cloud in the process. There were still tour parties being led up onto the ice despite the rain, but the returning trampers looked so invariably miserable it didn’t seem worth the effort to get any closer. 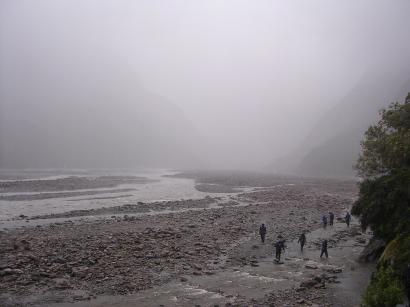 Still, the environment was pretty awe inspiring anyway as there was so much rainfall that water was cascading down the cliffs on all sides. Here’s a last photo of cloudy mountianside and waterfalls just to make sure you understand just how wet it was up there: 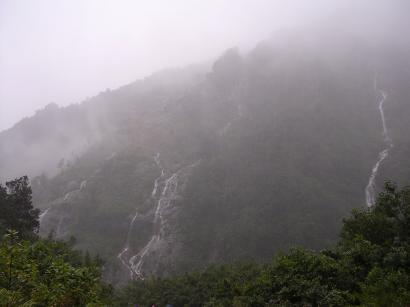 So the stopover wasn’t entirely futile even though we missed out of the main attraction. If you want to see the glaciers, then perhaps it’s better to allow a bit more time in case of similar conditions, although the problem with this is that the accomodation is limited and tends to get booked up very fast.