I promise. Well, at least until I see the film itself. The weather held out for Wellington’s big day on Monday, and the sun beamed down on the thousands of people who turned out hoping for a glimpse of their favourite LotR actors. Most weren’t disappointed, as despite the crowds it was possible to see what was going on even if it proved more difficult to get any good photos. 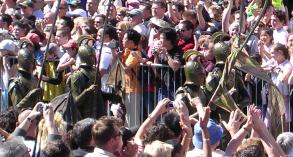 The parade, which ran all the way through the centre of the city, made me think of a US ticker-tape parade or a Royal occasion back in the UK, but with far less security than you’d expect given the numbers involved. Interspersed between groups of costumed extras, the stars of the film slowly made their way to the cinema for a round of speeches and the Premiere itself. They all looked pretty blown away by the whole event, and all seemed to have big smiles on as they drank in the adulation surrounding them. 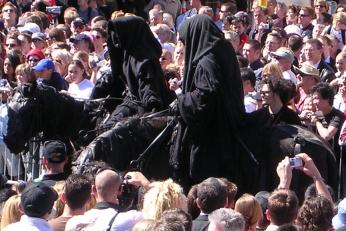 Unfortunately I didn’t manage to get any good shots of the stars themselves. I had a reasonable vantage point, but the sheer frenzy that greeted them proved beyond my capabilities to penetrate. I’m not too bothered really, as I’m sure we’ll all see plenty of them all over the coming weeks as the hype continues to build for the film’s general release. In the mean time here’s another shot of some of their escort.

The parade was fun, and seemed to live up to the city’s expectations. There was a general sense of carnival throughout the day, and I don’t think anyone really expected to get a lot of work done (I had a job interview rescheduled for Tuesday). Even the phone company got in on the act (I hope you can make out the screen, it says we’re in ‘MiddlEarth’)

Should you think that the whole country was united in LotR celebration, I should mention a few signs of dissent that were present, albeit almost swamped, on the day. As the band which concluded the parade marched past the spot I’d found for myself, a handful of people unfurled a large banner:

A little further down the road was another small group standing around some graffiti-covered cardboard boxes haranguing the crowd on the same issue. There was some debate with a few of the surrounding crowd, but I didn’t stay to watch for long. There weren’t many people protesting - a tiny number compared to the crowds happily watching the parade go past - but it’s worth a mention, especially as the latest issue of The Package mentions something similar in a short piece on some of the consequences of increased tourism to NZ. There is some concern over these issues here, even if it doesn’t seem to rate much of a mention in the mainstream media outlets.

We watched the speeches in a bar, although for some bizarre reason the local media kept interrupting their coverage of the days events - even in the middle of the speeches - to report on mundanities such as the sports results, or some piece of dull local news. This was actually the subject of complaints in the letters page of the paper later in the week, so it wasn’t just us that found this a bit odd. After the speeches were concluded and the stars enjoying the fruits of their labours in the cinema, the crowds began to disperse. We headed down to Taranaki Wharf to watch some of the entertainment laid on, but it quickly became pretty cold and we ended up heading home to bed rather than sitting up to watch the Two Towers yet again - after all the bloody hype, we plebs still have to wait until the 18th to watch the damn new film ourselves!