Wellington is currently in a fit of Lord of the Rings insanity. The World Premiere of The Return of the King is being held here on Monday, and the city is gearing up for the big event. The local papers are already full of gushing reports about stars being spotted in the city and many of the shops are sporting special window displays (regardless of what it is they actually sell in the normal course of things) as there’s a display competition being run by Positively Wellington Tourism. I reckon this well dressed Orc has got to be my favourite so far: 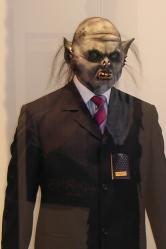 A set of commemorative stamps have been released to mark the occasion and these are the source of much of the more obvious decoration - from banners adorning the street lights to billboards to vast sheets tied across the fronts of office blocks. The largest depicts Sir Ian McKellen as Gandalf, hangs down about eight floors from the front of the NZ Postal Service building and has become an icon of LotR-obsessed Wellington, but I prefer the (slightly) more subtle approach embodied by this three-dimensional billboard: 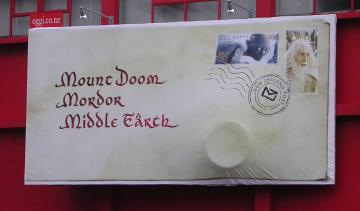 There are two cinemas associated with the Premiere, the Embassy and the Reading Cinemas complex in Courtenay Central, and atop each building perches a Black Rider astride his dragon-like winged steed gazing down balefully on the passing throngs.

There is to be a great big parade on the day of the Premiere winding it’s way through the city to the final stretch of Red Carpet leading up the steps to the doors of the Embassy Theatre. Most of the inner city hotels and hostels are completely booked up and have been for weeks and weeks; had we not sorted a flat this week we might have faced a night in the park on monday! 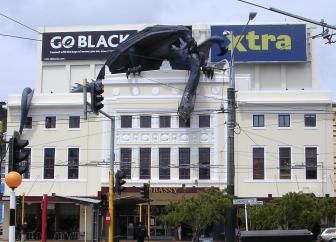 It’s quite fun being in a city the size of Wellington when something like this is happening - it’s small enough for the excitment to get everywhere, and you can’t help get a bit caught up in it all even as a visitor. We even had a moments excitement ourselves the other day when we realised that we’d just strolled past one of the hobbits!