This evening I witnessed my first Kiwi protest event! And all by accident, too. We were taking a stroll around the city to check out where I have to be for a job interview next week and to have a peek at the Cave Troll, when we spotted a poster exhorting the reader to attend the monthly Critical Mass protest, meeting in Civic Square at 5.30pm. As Civic Square is where you can find the aforementioned Troll, we ended up there at about the right time.

For those unfamiliar with modern protest movements, Critical Mass is the name associated with anti-car/pro-bicycle groups in various cities around the world. There are protests using the same name in London, some of which I’ve witnessed in the past. I don’t think that there is any overarching Critical Mass organisation - the name is adopted by different groups in different cities who have similar agendas but who may not communicate in any strategic manner, except for the odd occasion when an attempt to synchronise protests across the globe is made.

Unfortunately for the Wellington Critical Mass crowd, something kept the numbers down - there were only about 30 people on the demo. Perhaps this is a factor of population, or perhaps the fact that many students will have left the city for the summer holidays had an effect. Maybe no one in Wellington gives a shit - Heaven forbid! Still, top marks for pluck, as those that were present carried on regardless and braved the rush hour traffic. There were no police in sight, and the only camera I spotted was my own - so I felt homour bound to record the event. 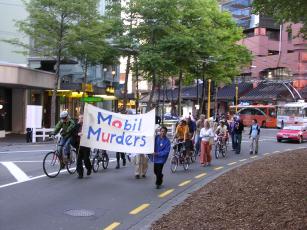 There were two main strands to today’s protest according to the leaflet I was handed. First off were the general principles of oppostion to a car-dominated society, with the specific Wellingtonian issue being the proposed construction of an inner city bypass. The flyer recommends a visit to the Campaign for a Better City for more info on this. The second strand was a protest against the Mobil Corporation, which the protesters accuse of having a part in crimes against humanity committed in Aceh, Indonesia. They allege that the corporation hired units of the Indonesian military to provide security for their assets in the region that were at some unspecified stage involved in “systematic torture, murder, rape and other acts of terror”. The leaflet recommends a visit to the International Labour Rights Fund for more information on this issue. I suppose I should take a look through ExxonMobil’s website to see if they have bothered to refute any of these allegations, but I’ll leave that as an exercise for the reader.