Napier is situated on Hawke’s Bay, on the eastern shores of the North Island. Looking out into the Pacific, you can get a little dizzy - it’s a long, long way to the Americas from here. The beach is made up of coarse pebbles and the currents make it too dangerous to venture into the water despite the almost Mediterranean climate and the picturesque nature of some of the sea front. 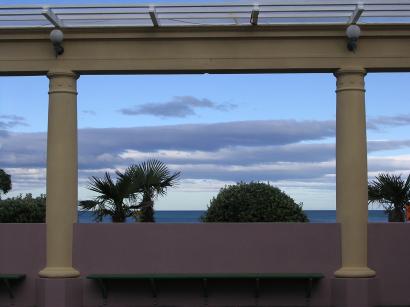 But Napier is most famous for it’s nearly unparalleled collection of Art Deco buildings, so it’s inhabitants probably don’t lose a lot of sleep over the state of the beach. The Art Deco buildings were all constructed following a devastating earthquake - 7.8 on the Richter Scale - which took place at 10.47am on February 3rd, 1931. The centre of the city was almost completely flattened, and 162 people died either in the quake itself or in the fires which followed. 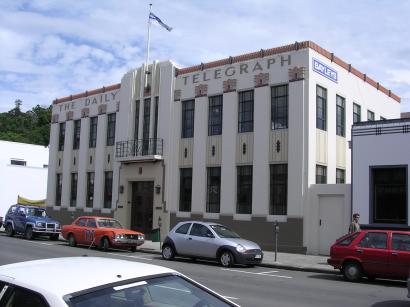 It took only two years to rebuild the majority of the town, all in the modern styles prevalent in the 1930s. The main influence is clearly Art Deco, but there are elements of other styles of the time too; particularly noticeable are the examples of Spanish Mission and Stripped Classical, but even these buildings usually have a strong Art Deco influence apparent. 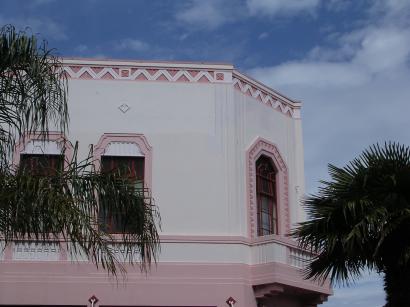 In recent times the value of this architectural heritage has become more evident to the local people, and there have been concerted efforts to maintain the buildings in good order and to prevent any demolitions - there were some unfortunate incidents in years past when some of the buildings were destroyed, often for reasons more to do with fashion and whimsy rather than necessity.

Although Napier is not a large city and the central district is easy to walk around, there is such a profusion of great architecture that it’s impossible to do justice to it on a website like this one. I’ve tried to select a few images that provide a sense of town, although I found it difficult to get good shots of many of the buildings. I did manage to get what I reckon are a few good detail shots of smaller features worthy of note, though: 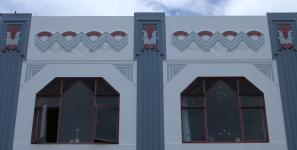 One feature particularly worth mentioning is the use occasional use of Maori imagery in the decorative aspects of some of the buildings. Deco architecture often used designs drawn from the Mayan and Aztec cultures, due to the desire of American Deco architects to use local art as a source of inspiration rather than the more traditional European styles. Much of Napier’s architecture follows the American style wholesale, but some buildings show some Maori influence. A particularly good example is the ASB Bank building which uses such designs on it’s interior ceiling… 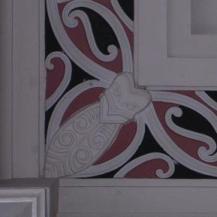 …and for decoration outside too, like these reliefs above the windows which mix a Deco-style zigzag with Maori pattern:

It’s not just the buildings which contribute to Napier’s 1930s feel. There are echos of Art Deco everywhere, from the manhole covers and drain grills to the old fashioned cars than seem to appear on the streets more often than elsewhere.

We only spent two days in Napier, and we had a great time. It would certainly reward a longer stay - just sitting and eating or drinking in some of the cafes and bars was an atmospheric experience in itself. 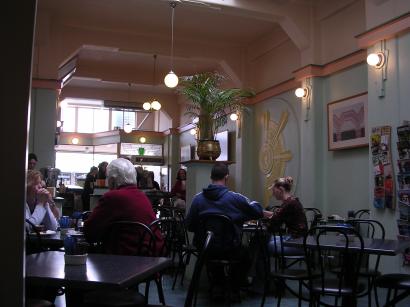 It was a great place, well worth a day or three looking around. I can recommend the Walking Tour run from the visitor centre on Marine Parade every morning at 10. It costs $8, and you follow a knowledgeable local around and get a pretty comprehensive rundown on the city and it’s buildings. If you prefer to be independent, you can pick up a leaflet with a map and enough information to wander around yourself for $2 from the visitors centre or the Art Deco Shop on Tennyson Street. Most of these activities are organised under the auspices of the Art Deco Trust. There is also an Art Deco Weekend at the end of February involving activities like dressing up in ’30s outfits and similar fun for the real hardcore Art Deco fan.