Taupo sits on the northern shores of the eponymous Lake Taupo, right at the centre of the North Island. The lake and surroundings are beautiful, clear blue water with the snow-capped volcanoes of the Tongariro National Park visible on the far shore on a good day. 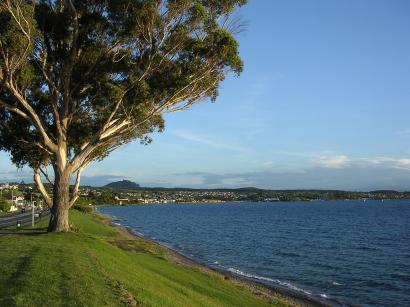 As the bus drivers never tired of reminding us, the Lake has it’s origins in comparatively recent times - less than a blink of an eye in geological terms. It was formed in the aftermath of a massive volcanic eruption, the largest in recorded history, when some 24 cubic km of rock and debris were ejected into the atmosphere causing effects recorded by both the Romans and the Chinese. This has allowed the eruption to be dated accurately to 186AD.

Taupo is a popular holiday destination among New Zealanders. There is the usual array of adventure sports (most notably several Sky Diving operators and the Taupo Bungee over the Waikato River), excellent Trout fishing, more geothermal stuff, water sports and boat trips, the Huka Falls (see below) and the Tongariro National Park, just round the Lake.

Tongariro was our main reason for stopping in Taupo. The Tongariro Crossing is supposed to be one of the best single day walks you can do in the whole of New Zealand. It takes you right through the volcanic heart of the North Island past the three great volcanoes - Ruapehu, Tongariro, and Ngauruhoe. I say supposed because the good weather evident in the photo above did not last, and we were unable to do the walk as the companies who run day-trippers up into the area to do the Crossing weren’t operating due to dangerous conditions. We hung on for a few days, but in the end it seemed we’d be waiting forever so we reluctantly left for Napier.

This did put a bit of a dampener on our spirits, but we didn’t sit around moping all the time. We managed to get our and walk up to the Huka Falls one morning which you can reach on foot from Taupo by following the Taupo Walkway along the Waikato River. 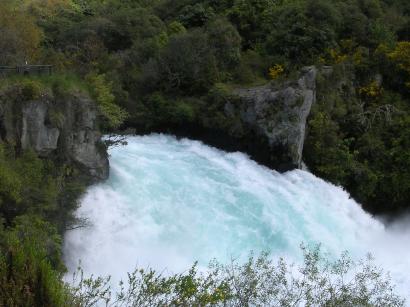 Although the falls only drop about 10 metres, the Waikato is the only river flowing from Lake Taupo so the volume of water passing over the falls is massive, and it makes a fair amount of noise. You get the occasional nutter kayaking over the falls, but it’s not recommended unless you know what you’re doing.

The walk also gave me the chance to experiment with the macro close-up function on my digital camera. This spider was about the size of a fingernail: 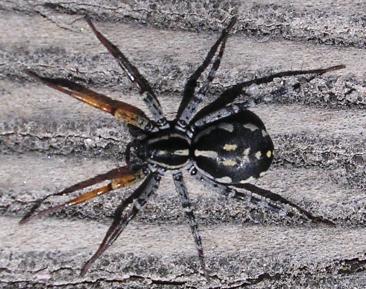 Not bad for a fairly basic point-and-shoot type camera. I don’t think the spider’s poisonous - unlike neighbouring Aussie, New Zealand has only one poisonous beastie, the Kaitapo Spider. That’s described as about 6mm long, black with a red patch. Hmmm.