Zorbing is one of those activities that makes you shake your head and wonder what the guys who invented it were taking at the time. For the uninitiated, Zorbing involves climbing inside a large inflatable double layered sphere and rolling down a steep hill. 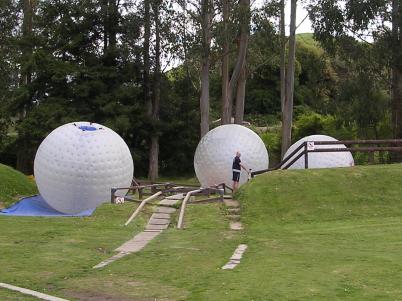 You can choose to be strapped in (the ‘Harnessed Zorb’), thus avoiding most of the risk of injury, or you can elect to have a bucket of water added for lubrication and go unfastened (the ‘Hydro Zorb’). If you choose that latter method you then get a choice between attempting to stay standing like some demented, amphetamine-crazed giant hamster in it’s exerciser, or merely trying to reach the bottom of the hill with all major bones intact. Not only this, but up to three people can pile into the same zorb for a rather wet, bouncy and potentially painful bonding experience. 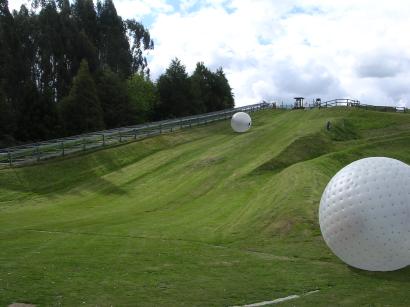 Believe me, the hill was a lot steeper than it looks in that photo. The whole experience was actually great fun, although it was over far too fast. We spent the entire time slipping around the bottom of the Zorb in the water wondering when we were going to hit something. The guys running the place took some photos of us in the Zorb with Pol’s camera, so you’ll have to wait until we get the film processed and the images scanned to see us lying in a soaking heap at the bottom of the hill with big smiles. Next time, I’m going to try and stay on my feet!