The Wai-O-Tapu Thermal Wonderland, about half an hour south from Rotorua, is one of the two main out-of-town thermal areas featuring all the trimmings – Geysers, multi-coloured pools, bubbling mud and steaming hillsides. It’s all pretty impressive and the walkways and paths set into the landscape make it very easy, if somewhat touristy, to explore.

The main geyser action is provided by the decidedly contrived Lady Knox Geyser. I say contrived because at 10.15 every day the geyser is induced to erupt when a chap lobs a block of soap down the spout. I’m told that this reduces the water’s surface tension and allows the build-up of boiling water and attendant steam to escape at high velocity in an upwards direction. The effect is fairly spectacular, though. 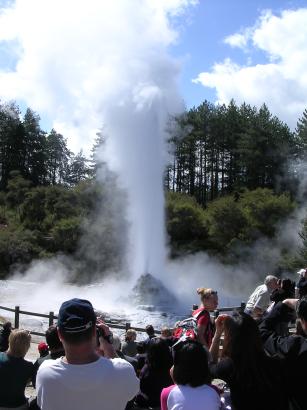 Having sampled the joys of Lady Knox, most people head up the road to the main attraction at the Thermal Wonderland. It isn’t inappropriately named, especially if you come from a part of the world with little or no geothermal activity – the various chemicals turn the rocks and waters into a variety of otherworldly colours. 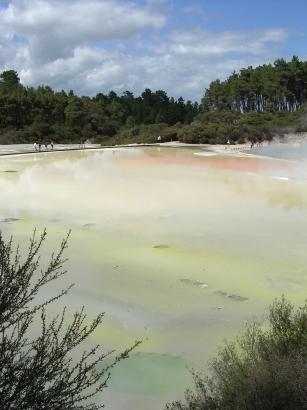 The area to explore is fairly large, and takes at least an hour to walk around at a fair pace. There are slopes and steep climbs, but it’s worth going all the way round to the end to see the bright green colour of Lake Ngakoro. 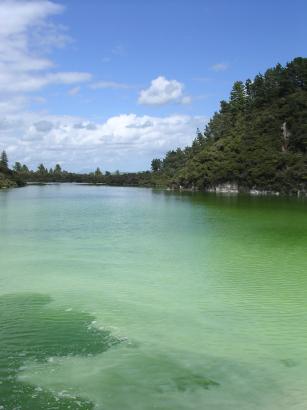 Other highlights include the Champagne Pool, a steaming body of water lined with cracked red earth which constantly bubbles 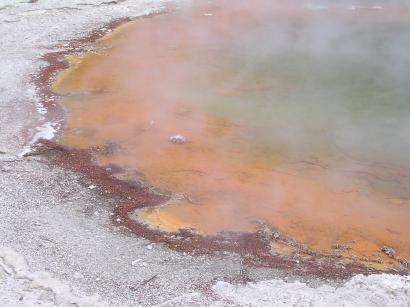 And the Devil’s Bath, another unworldly green pool at the bottom of a crater near the end of the walk. 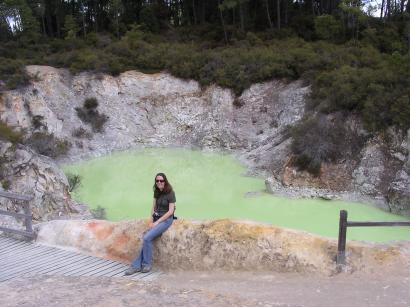 That last one makes me think of rancid milk, but a pretty girl can liven up even the most bizarre place 😉

There are loads of other colourful and bizarre spots at Wai-O-Tapu, but I can’t put up photos of them all. It’s definitely a site that’s well worth a visit, although it is very popular – we were told that huge numbers pass through each day during the peak season, which might reduce the impact a bit. Especially since it seemed fairly busy to me already, and it obviously gets quite a bit more crowded.