The first thing you notice about Rotorua (which means “Second Lake” in Maori) is the stench. Climbing out of our air-conditioned coach and taking a deep breath of shockingly eggy air was a bit like stepping off a plane in a tropical country and being hit by that wall of heat and humidity.

They say you get used to it within a day or two. I’m not so sure, we were still getting wafts as we left four days later, but it does recede from the forefront of your consciousness after a while. And perhaps I’m exaggerating a little, but I think I’m allowed bit of poetic license.

For those reading who are unfamiliar with the sights, sounds and smells of New Zealand, Rotorua smells because it is in the midst of a highly active geothermal area. This means there are lots of hot pools, bubbling boiling mud pits and explosive geysers to look at, as well as some spectacular multi-coloured landscapes caused by the various chemicals in the soil. We explored a few of these, but the first thing we did was chill out at one of Rotorua’s famous spas as it was Pol’s birthday.

(Misplaced Apostrophe Syndrome being particularly bad in Rotorua, for authenticities sake I should have written spas as spa’s, but I just couldn’t bring myself to.)

When it comes to spas there’s a lot of choice in Rotorua, and we headed to the fairly well known Polynesian Spa for a soak in the exclusive Lake Spa pools and a massage. Although a lot of tourists pass through this complex, most end up in the cheaper pools, and the Lake Spa section has great views over Sulphur Bay and a private bar and relaxation area for those willing to shell out a bit extra. Nice. Unfortunately I have no piccies of us in our swimming gear relaxing in the hot pools, so you’ll just have to use your imaginations. But here’s one of the coffees we had later on that morning: 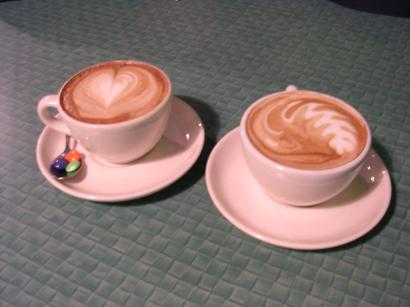 New Zealand’s coffee culture deserves a post all of it’s own – maybe another day. We liked these particular coffees because of the patterns in the milk froth. I understand that creating these patterns can be considered an art, and that there are even competitions. I have no idea whether these particular patterns are the result of chance or artifice, but they look quite nice regardless. We were served these at the excellent Zippy Central cafe on Pukuatua Street.

Fortunately the name of the closest thermal area to the city is commonly shortened to Whaka. It’s about twenty minutes walk out of town along the motel lined Fenton Street, which we later learnt is apparently responsible for Rotorua’s nickname of Roto-Vegas (“They have Casinos, we have Motels” – Go Figure, as the Yanks might say). But it’s worth the walk. The reserve has been divided in two due, according to our guidebook, to some kind of land rights dispute. We visited the largest section, run by the New Zealand Maori Arts & Crafts Institute.

There’s lots of pretty cool stuff to see in the complex. First and foremost are the geothermal features – the Prince of Wales Feathers and Pohutu geysers and the various pools of boiling mud, like this one, the Ngamokaiakoko pool: 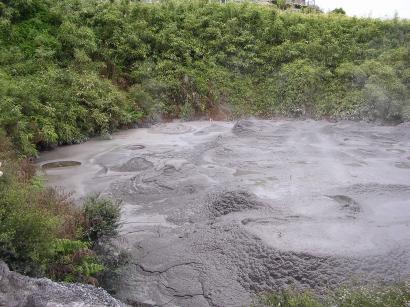 There are even pools of hot water that the Maori used (and still use in some cases) to cook their food in. This one is named Ngararatuatara which, like Te Whakarewarewa, just rolls off the tongue. 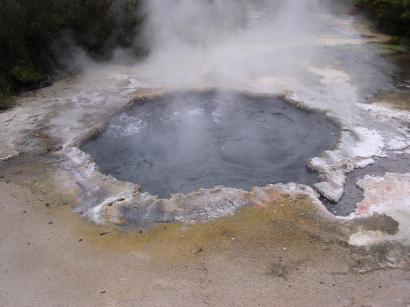 Despite being surrounded by sights like this, I found one of the weirdest things to be just walking through forest and bush with steam rising from the ground on all sides – it was this that really brought home to me the foreign-ness of the place. 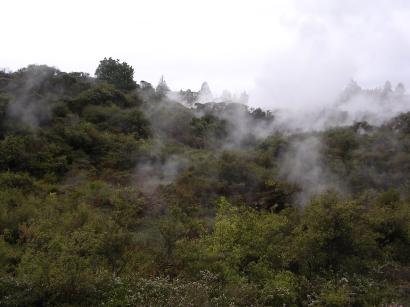 There’s more to the Arts & Crafts Institute than steaming forests and boiling mud. They also run a Kiwi breeding programme and have a nocturnal house where we caught our first glimpses of real live Kiwi birds, well worth the price of entry alone. Alongside all this are the arts and crafts themselves. The the complex is home to a school teaching young Maori the traditional carving and weaving techniques and there are loads of fantastic examples on display. And if all that wasn’t enough, there is also a Cultural show twice a day with dancing and games and face-pulling and spear waving, and it’s all included in the standard entrance fee of $18. A great day out.

There’s loads more to do around Rotorua – far too much for one post here, so look out for upcoming posts on the colourful Thermal Wonderland of Wai-O-Tapu and our experiences of rolling down a hill inside an inflatable ball half full of water, then it’s off for a slightly disappointing time on the shores of Lake Taupo followed by a great time in the Art Deco City, Napier.