A few brief (ha!) notes on bus journeys here in NZ, since at the moment that’s how we’re getting around. There’s a network of buses operated by what seem to be two separate companies who appear to co-operate rather than compete - InterCity and Newmans. We bought a “Flexi-Pass” ticket, which works by time - you buy a certain number of hours and time is deducted from your pass according to some arcane system that we don’t quite understand, but so far everything is going well.

(The next paragraph is a more detailed rundown on the Flexi-Pass (the Discordian in me keeps wanting to type Flaxi-Pass) intended for anyone surfing by looking for a punters-eye perspective on the ticket. Those visiting for a bit more colour could do worse than skip down to the following paragraph.)

The system works like this: you buy a Flaxi-Pass with a given number of hours (supposedly cheaper the more you buy but the saving seems fairly miniscule and you never know when your plans might change, so I’d recommend not buying too many), then phone the day before you travel to book a seat on a bus. You have to phone, you can’t just turn up or book in an office, but it’s a free call. So far, the buses have been fairly quiet, never more than half full, so we’ve always been able to get on to the buses we’ve wanted. (This may change as the summer arrives - no doubt we’ll find out.) When you book, you provide the serial number from your pass, then the operator is supposed to ask you for the password you choose the first time you called to make a booking. This is obviously designed to discourage pass theft but, since you don’t always get asked for it, seems like a bit of a waste of time. When you roll up (15 minutes early!) at the bus stop, the driver should have your name on his list. Sweet as, as they like to say around here. So far, it’s all been working as advertised, but it’s a fairly new ticket and we get the impression that the whole thing is still in beta, as it were.

Our journeys have all been painless - no hassles, on time, with friendly and helpful drivers. The roads are mostly winding single lane affairs, even on the major routes, but there’s no congestion. Consequently the locals (including heavily loaded logging trucks) like to drive fast, hang off the bumpers of tourist hire-cars and indulge in some shocking overtaking maneouvres. White crosses by the sides of the larger roads mark the locations of some of the nastier head-ons.

The most remarkable thing about the experience has been the staff. The drivers of both companies act more like tour guides than bus drivers. Bear in mind that these coaches are used by locals as well as budget tourists - they are not exclusively aimed at visitors - but nevertheless the drivers provide a running commentary on local attractions to the extent that on one journey (Waitomo to Rotorua) we wondered if we had mistakenly boarded a tour bus rather than our scheduled National Express equivalent. The commentary often includes vast quantities of proudly related details on the local feats of engineering and manufacturing - so far we’ve had glowing accounts of hydroelectric and geothermal power stations of various kinds and of New Zealand’s extensive and huge dairy product processing plants. You just can’t quite imagine getting this sort of commentary back in the UK. 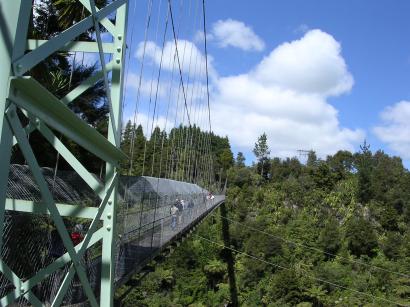 The aforementioned Waitomo to Rotorua journey even included a brief layover at the sight of a large Hydroelectric plant on the Waikato River called, IIRC, Arapuni. The driver enthused over the historic swing-bridge dating back ot the construction of the dam which was used at the time to get the workmen over the gorge separating their quarters from the worksite. To be fair, the bridge and the view it commanded were quite spectacular. 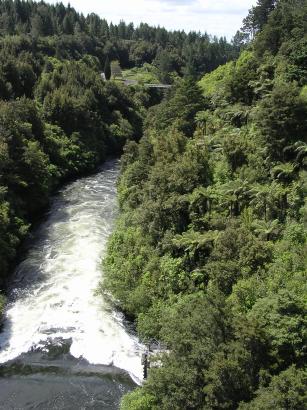 The next post on this site should be more visually pleasing - it’ll be all about Rotorua, and there’ll be lots of photos of mental volcanic mudpools and geysers and multicoloured lakes and stuff like that. Not to mention the Zorbing.