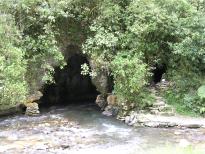 Waitomo is one of New Zealand’s premier tourist attractions, most famous for the limestone caves which riddle the hills and the glow-worms inhabiting them. Most people who visit the area do so very briefly, only allowing enough time to do a cave trip of some description – some involve a fairly sedate walk or boat journey through a cave lit by the green lures of the glow-worms, others are more adventurous and involved clambering up underground waterfalls and abseiling down pot-holes.

We didn’t stay much longer ourselves, only long enough to do a couple of the walks the area has to offer in addition to the obligatory cave trip. I’m afraid to say that we bottled out of the more radical trips due to the strong possibility of having to squeeze through tiny claustrophobia-inducing nooks and crannies, but our more relaxing clamber and boat trip through a large-ish cave was worth it for the spectacular glow worms. No photos of those, unfortunately, as you’d need a tripod and at least 5 or 6 minutes of open shutter time to get anything at all on film, you’ll just have to take my word for it that they were pretty amazing.

The walks were worth it too, particularly the Ruakuri walk through the bush to a natural tunnel, the result of cave collapses in the past. The walk takes you up and down fairly steep bush-clad slopes and in and out of old caves around a river valley. Apparently the walk is worth doing at night, as the area in infested with glow-worms which make for a magical atmosphere. Unfortunately this only highlighted the desirability of a car, as the walk is several Kilometres outside of the village and too far for us to come on foot at night.

Other good walks are the Opakapa Pa walk, which ends on a hilltop with great views which was the site of a Maori Pa (fortified settlement) a few hundred years back. Lastly, the 10km Waitomo Walkway is a good way to get out overland to Ruakuri if you don’t have a car or just fancy a pleasant tramp though the karst hills.

Also worth a mention is the Waitomo Museum which, although perhaps orientated more towards the school parties which come through every day, is worth visit for the thorough rundown on the local flora, fauna and geology. (This was a few years back now, so may have changed. There is a visitor centre, and a new webiste.)