So, I got this Sony Vaio PCG-C1F, right. My mate Gavin loaned it to me. The particularly good thing about it is its size - small enough to carry round without any hassle. 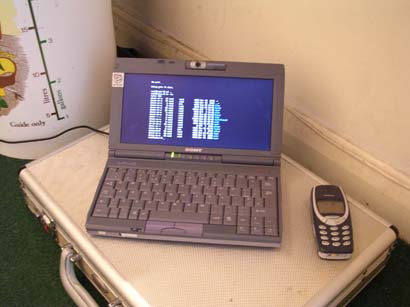 Thing is, I’ve put a nice new Slackware 9 install on it. Sounds good - but I’ve got to do all the configuration myself. If I didn’t know any better I’d assume that Gavin thought I needed a project to keep my mind busy. Still, I suppose it gives me something else to post about, too.

Linux can be a little bit of a pain to install on laptops sometimes - there’s a lot of scope for non-standard hardware and the like for which no-one has got around to hacking out device drivers for yet. Still, at first glance, installing a recent distro on the little Vaio seems like a fairly straigtforward task. Touch wood.

The basic install goes well. The machine boots, and the kernel recognises the cards that came with the machine - the ethernet card Just Works. The modem and wireless cards are recognised, and just need some configuration - I can easily whip up a chatscript for the modem, but I’m a bit less certain about what to do with the wireless card, having never used this technology before. Still, one thing at a time, and the first thing I want to do is to get XFree86 running satisfactorily.

The standard XF86Config file installed alongside with Slackware is actually enough to start X despite the fact that it thinks the screen is 1024x768 whereas it is actually 1024x480. A bit of manpage reading and a quick surf later, and I had a nice little example of an XF86Config file as hacked together by Jochen Topf for his Sony Vaio (there were once links here, but these pages are long gone now). This doesn’t quite work - he uses the svga driver which I don’t seem to have, and one or two other little minor errors crop up - but a quick glance in /usr/X11R6/lib/modules/drivers turns up a rather promising little file called neomagic_drv.o. The Vaio uses the NeoMagic MagicMedia 256AV, so this looks good.

And sure enough, between this, Topf’s mode line for 1024x480 and a bit of a ripoff from the stock config file, I’ve pulled together an XF86Config file that allows me to startx quite happily and launch the XFce Desktop Environment, which for some reason Gavin and I selected as the default window manager when we were doing the original install without knowing much about at the time.

Despite prioritising getting the X server running, I find that I’m spending very little time using it anyway. Oh well. Next thing I did was to get my digital camera working, a Nikon Coolpix 3100, which proved very simple. This simple: plug in the USB cable, and type

And off we go. Straight out of the box, as they say.

Next up: the modem and wireless cards. Not to mention a bit of trimming in /etc/rc.d/ to cut down on a raft of unnecessary services.