(For the confused, a brief intro to the concept of flash mobs can be found at flashmobs.co.uk.)

Despite feeling a bit of a prat, I quite enjoyed this experience. I say this because it all seems a bit silly really – obeying a set of anonymous instructions, several hundred people all proceed to a public place and behave in an odd manner. Still, it was fun. Unfortunately my camera was running a bit low on power, but I got a couple of piccies, reproduced below.

The mob proceeded pretty much as the instructions described (see below), although there was some confusion as to when to shout ‘ahoy!’ and when finger-clicking was called for. Trying to remember to click your fingers every time someone used the letter Y was a bit tiresome, to be honest. 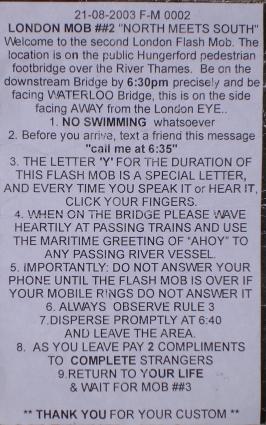 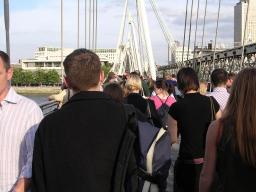 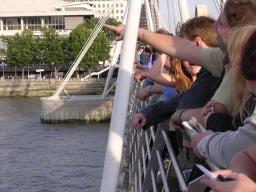 There seemed to be quite a few people there, and everyone was laughing and not taking it all too seriously. There also seemed to be a fair number of people with cameras of a size suggestive of journalism, so I expect a certain amount of coverage, although interest will probably wane fairly quickly. There was even a chopper circling within moments of everyone’s arrival.